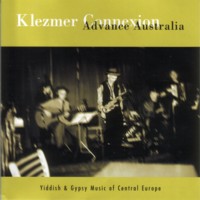 "Gypsy Jazz is an emerging genre which plays well in both Jazz and World Music categories. Klezmer refers specifically to the Yiddish stream of the idiom, which encompasses the music of the European Jews stretching from Romania, through Poland and Ukraine and up to the states of the old Soviet Eastern block.
"The Klezmer Connexion played its first engagement in March 2001 and conitinued to play throughout the year, appearing regularly at La Bar in Taylor Square (Darlinghurst, Sydney) and the Hakoah Club (Sydney) and as featured artists for the Yeshiva Gala, hosting Kim Beasley (former Australian Labor Party leader) and Nick Greiner (former NSW Liberal Party leader/NSW Premier) as guests of honour. The band's repertoire includes traditional Freilachs and Horas and a dance repertoire that explores the idiom in a contemporary context.
"The musicians have extensive experience in a wide variety of music genres and have found a reference point for each other through the music of old Klezmoria. Exploiting the natural tensions of the harmonic minor, Klezmer brings a wide variety of dynamics into the musical vocabulary which makes for fresh and spirited performances.
The accompanying CD, newly released, gives a small sample of the band's sound and repertoire. The Klezmer Connexion can perform as an instrumental combo, or make use of the considerable vocal talents of its musicians."

For more information about the band, or to purchase the CD
contact Raoul Hawkins.