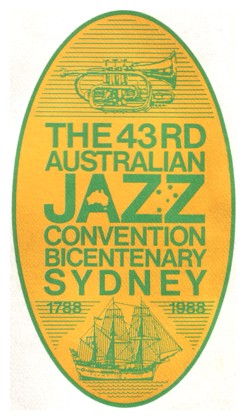 The annual Australian Jazz Convention for 1988 was held at Sydney University and I was co-opted at the last minute to do the stage managing job along with bassist, Peter Gallen.
This meant, in my case at least, that I wound having to organise P.A. Systems for several venues around the University as well organise all the drum kits, amplifiers (as required) and making sure that all the pianos were tuned and ready.
We also played in several bands over the course of the convention. In my case, along with most of ALL HAT JAZZ, myself and friend Bob 'Bobby Scott' Harris decided to have some fun with a line-up we called BOB'n'HEAD BEACH in which we would sing together for the first time.
As well as myself and bob on vocals we had Tony Barnard (guitar), Tony Buckley (bass), Adam Barnard (drums), Alan Davey (trumpet), Brad Child (tenor saxophone), John Boatswain (baritone saxophone), Russell Davey - Alan's father (trombone) and the infamous 'Hennessy' - Terry Hennessy (army boot).
Shortly after we'd finished out own set, a gap sudden;y appeared in the program when a band didn't show and I had rush around and see who was available and would have a bash. In the bar I found a few friends who nsaid they'd only do it if I sang with them and so was born The CONVENTION CLEANHEAD Band, so named after the Eddie 'Cleanhead' Vinson tune of the same name. This band consisted of the late Roger Janes (trombone), Gary 'the Boogie Maggot' Walford (piano), Peter Strohkorb (clarinet), Barry Canham (drums0 and a trumpeter and brass bass player whose names I cannot recall. I sat out for the last tune of the set and the marvellous Nick Polites sat in on second clarinet.
Rod 'BEACHHEAD' Jeffery
September 24, 2009
1988
- Page created Saturday, September 26, 2009 -
Last updated - Saturday, September 26, 2009